Given the current situation regarding the pandemic, all vocal ensembles around the world have been facing the same problem – the inability to hold joint singing performances or even rehearsals. Taking in consideration a great impact that music has on peoples lives in general, two choirs, one from Croatia and the other one from Iran have decided to overcome this “little” obstacle and perform together. Vocal Popular Music Ensemble from Varaždin School of Music and Tonal Choir from Tonal Music Academy accepted the challenge placed before them and as a result we now have this unique international music collaboration. Guided by the idea that if something can’t be live right now, anything is possible online, even a trip to another continent and getting to know another, somewhat distant and unknown culture.
The conductor of the Tonal Choir from Tehran, Milad Omranloo, and the conductor of the Vocal Popular Music Ensemble, Janja Knapić, have chosen Christopher Tin’s song Baba Yetu, an African song, a prayer of Our Father on Swahili, which was prepared and recorded by the mentioned choirs.
Why Baba Yetu? In this relentless time in which we currently live when a man is directed to a distance from another man, when interpersonal relationships have been reduced to a minimum, it is necessary to reset, to return to the “beginning”, to return to ourselves. That is why “Baba Yetu”, that is why “Africa”, our common cradle of humanity, the connection between all people.
As the conductors themselves note, the decision to record audio and video recordings of the choirs was a great challenge for them, but the desire to collaborate was immeasurable for everyone. Members of the ensemble Vocal Popular Music of the Varaždin Music School are students at the School, while the choir Tonal Choir is composed of experienced young musicians, who in this project gave additional support to their younger colleagues from Varaždin. Already at the beginning of spring, the choirs began preparations for recording, audio and video recording of each of the choirs did separately, and after that all parts of the recording were merged into one whole, the video that is in front of you today. Filmed at the beautiful locations of the Cinema Museum of Iran, Trakošćan Castle, as well as the landscape of Tehran and across Varaždin County, this video will take you on a journey through Croatia and Iran with the sounds of music in Swahili. With the desire that singing together will soon become a part of our everyday life again, and not just a distant memory from the past, these two choirs joined their voices. But they did more than that, they also connected their hearts, their thoughts and two different but beautiful cultures and showed everyone that despite all the differences we are all equal. We believe that in the times ahead we will be given the opportunity to hear these talented musicians live, as well as that the musical spirit will come to life again and resonate in the streets of all cities. 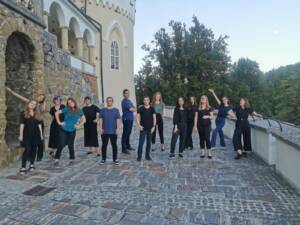 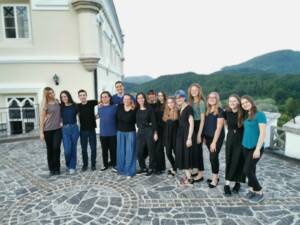 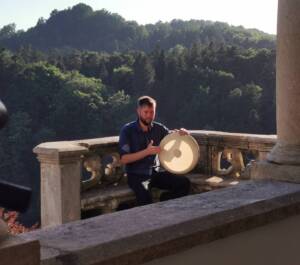 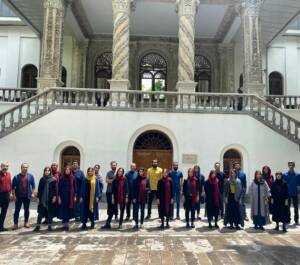