Carmina Burana for the first time in Varaždin

Cantata “Carmina Burana” by a German composer Carl Orff, a work first performed in 1937 in Frankfurt am Main, is one of the most popular works of classical music from the 20th century, and is going to be performed for the first time on the territory of Varaždin on 14th of September. The performance of this piece is a part of the international project “Drava nas spaja”, made in cooperation with Varaždin School of Music, Conservatory of Music and Ballet Maribor, Chorus angelicus Choir and Varaždin Concert Office. Carl Orff’s monumental work, a world known cantata for orchestra, choir and solo singers, will be, for the first time, performed by students of the Varaždin School of Music on 14th of September 2019 in Varaždin and two days later at the Slovenian National Theater in Maribor, together with students of the Maribor Conservatory and singers from the choir Chorus angelicus.

Carmina Burana is a vocal instrumental piece written for 3 soloists – soprano, tenor, baritone – one boy and two mixed choirs and a large orchestra. There are three mixed choirs involved in this major international project, the children’s choir, the Chorus angelicus choir and the symphony orchestra. Soloist roles are trusted to the professional opera singers – Ivana Lazar, soprano, Armando Puklavec, baritone and Danilo Kostevšek, tenor. The performance in Varaždin will be conducted by the professor of the Varaždin School of Music, Dada Ruža, and in Maribor by the professor of the Maribor Conservatory, Slavko Magdić, former student of the Varaždin School of Music.

The director of the Varaždin School of Music Davor Matačić emphasized that this is one of the largest projects in the history of the School. A project of this magnitude is something that young performers have not yet encountered and it is a great challenge for them. The demanding rehearsals for this superb music spectacle have been around for a long time, but as the participants themselves point out, all of this is for a greater purpose, and that is to do something of the highest quality with their work and effort.

There are only a few days left before the first performance of Carmina Burana ever takes place in Varaždin, and Dada Ruža who is going to conduct the performance, emphasized that it is a great pleasure to perform such a grandiose piece and that everyone is looking forward to the great concert ahead of them. 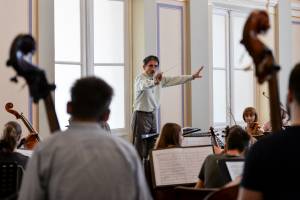 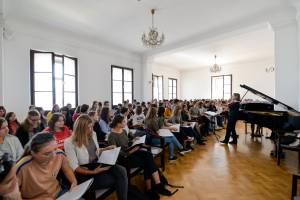